On Good Friday, Amanda started on a nutritional supplement; Voluntastrols – a botanical supplement containing specific secondary plant metabolites extracted from citrus, theobromine, cacao and chamomile. Since then I’ve kept a close eye out for any changes in behaviour or cognitive ability

For many months she has tried to improve her spelling and alphabetical skills using an ipad app from Tactus Therapy This generates 20 words at a time and she has to drag and drop the correct letters to spell the word. She generally begins to slow down by word 10 or 11

On Easter Saturday, she completed 20 words for the first time without hesitation or complaint.

On Easter Monday, I received an email from a Canadian speech & language therapist (thanks Karrie!) who recommended an app from Constant Therapy. With a 15 day free trial it was worth a try.

This app has spelling, plus symbol matching and clock maths tasks as well as matching items to categories; speech practice and two-step object placement exercises. To set the app up and give her a baseline score Amanda had to answer 28 different questions. She did this with full concentration throughout.

The next day she sat the first set of 65 questions which she managed in just over an hour; that’s more than 60 minutes of full concentration.

The next day, and another 65 questions later she knocked 10 minutes off the completion time. 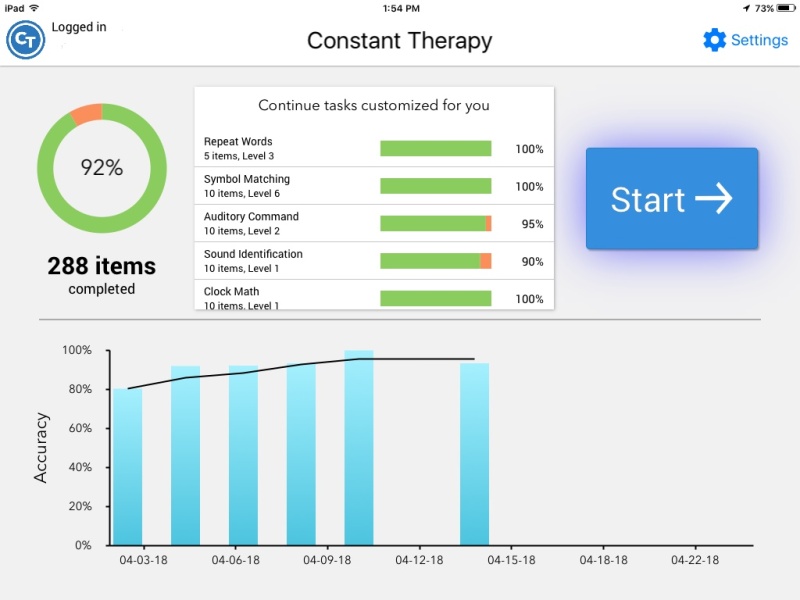 In the past 2 weeks I have also noticed she no longer says ‘sorry?’ (as in ‘pardon?’), every time I initiate a conversation. Her brain seems to have finally tuned in to the fact someone is speaking to her before she misses the first part of a sentence.

In addition there have been smaller, more subtle changes. For example she no longer confuses the names of our two cats,

Last week, on our regular supermarket trip she maintained grip on the trolley with her affected hand for the entire time.

Last night, without prompting, she correctly reset the temperature on the heat pump before going to bed.

She has also finally managed to negotiate the Playstation controller; a sometimes confusing mix of arrow keys and symbol buttons.

On Tuesday Amanda had an introductory hour at the local gym. One of the instructors has worked with a stroke recoveree as part of his training and so not only had a set of pre-prepared exercises, but also understood physical limitations and fatigue.

Amanda walked a few hundred metres on the treadmill and then used the recumbent cycle to pedal for 10 minutes. She was also shown how to use a Swiss ball to assist with balance and use a few muscles she’d forgotten she had! 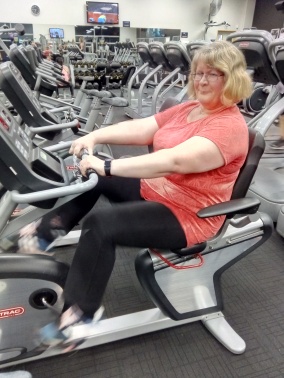 14 months post-stroke she appears to have entered a further period of consistent and (thanks to the Constant Therapy app), measurable improvement.

She continues to take Voluntastrols each morning. She refers to the capsules as her ‘brain bombs’.